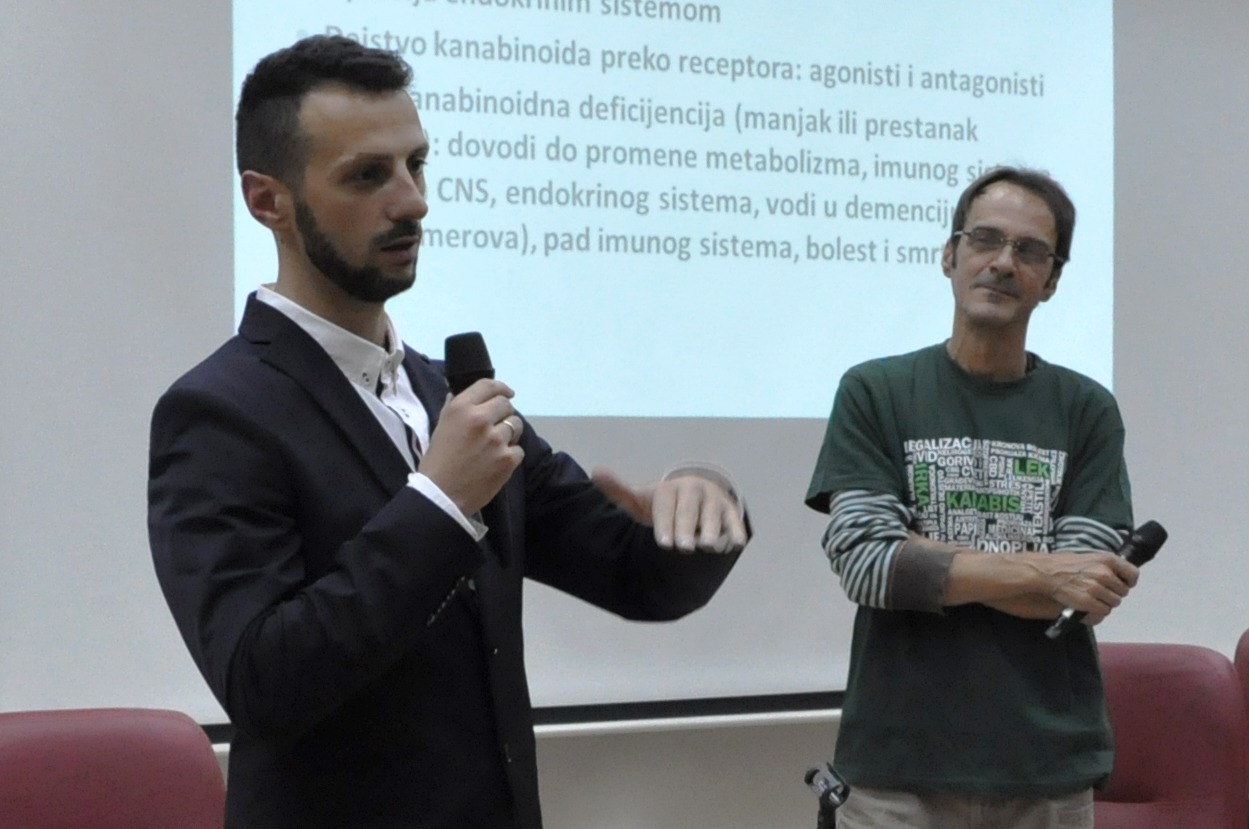 At the end of the second day of  “The Global Human Rights Forums” conference in Belgrade a discussion was opened about using cannabis for medical purposes. This was a third in a series of conferences organized by Association “Social Margin Center” with the main goal to open a discussion about burning issues in human rights domain. The association had invited experts for the topics that were discussed and statements said during the conference by the speakers and participants do not necessarily represent views of the organization and its members.

The panel was opened by Dr Dejan Stevanović who, at the very beginning of the presentation, stated that he will, in his presentation, show only the data acquired through several medical researches without bringing in his own stance toward using cannabis in patient treatment. In the first part of the presentation the doctor talked about cannabinoids and the way in which they influence brain receptors, both those which regulate our motor skills and the ones that regulate pain and immune system. In concrete terms cannabis is composed of tetrahydrocannabinol (THC), which is a highly psychoactive substance, cannabidiol (CBD), and other cannabinoids in different combinations. Next, a question was posed about safety of cannabis use, and the doctor emphasized that cannabis belongs to the first group of drugs that are considered the most dangerous because they cause a high degree of addiction. It is known to science that cannabis causes significant changes in our brain activity, and also in our cognitive system, like some aspects of memory and decision making. In cannabis use, psychiatrists are mostly concerned about psychosis, as a distorted perception of reality disorder. Another important thing is that the use of cannabis in adolescence can lead to different mental disorders later in life. A big problem arises in cannabis use for medical purposes in the means of dosage being used, because different doses influence patients in a different manner, depending on the illness being treated. When we speak of cancer, it is conformed that cannabis affects positively on pain reduction, but even there a problem with right dosing remains. In nearly all researches the same side effects appear: dizziness, nausea, and changes in short term memory and cognition. Considering multiple sclerosis, it is a fact that cannabis benefits patients because it has positive effects on the work and relaxation of their muscles. Dr Stevanović points out one more interesting fact, and that is that cannabis today is also used in treatment of some mental disorders, like anxiety, even though there are not enough research and evidence about that. Also, sometimes the improvements in patient’s health are explained with placebo effect, because patients believe that cannabis as a plant is healthier than therapy drugs. To sum up, the difficulties of using cannabis for medical purposes are: problem in setting the relation between THC and CBD, controlling the quality, because in a lot of plants differ in cannabinoid composition, the means of cannabis use (orally or by other means) and at the end individual differences of every patient. Dr Stevanović finished his presentation with a conclusion that there is no hard enough and trustworthy evidence that would make possible for cannabis to be legally introduced in medicine.

The second panelist, Miloš Simić, from the organization IRKA (initiative for changing the legal regulations of cannabis) presented his association and their goals. The association was formed in august 2013. and is comprised of patients which use cannabis for treatment, and of citizens who advocate legalization of cannabis in Serbia. Mr. Simić also talked about ingredients of cannabis and effects that they have on human organism. He pointed out that the basic problem is that most of the researches were done on animals in laboratory conditions because of the ban on testing cannabis on humans. The voice of the ill cannot be heard. In Serbia, the subject of cannabis legalization is completely censored by the media. The national television (RTS) allowed only one minute of air time for this topic after midnight, and a minute and a half during the morning program. The problem is not only in the censorship, but also in the arrests of people who were using cannabis for making oil that is used for treatment of different illnesses. The IRKA association is fighting to help people who are affected by different severe illnesses and is supported by many experts, one of which is Dr Robert Melamede. Speaking of legalization of cannabis, the association points out the positive effects of legalization in terms of benefits for the economy of the whole country. Regarding the quality of cannabis that Dr Stevanović spoke of, Mr.Simić argues that by introducing the legalization laws it would be possible to control the quality of the products, which is of the greatest importance for the ill and their treatment. Also, he considers that the relation between THC and CBD should be from 20:1 to 1:1, so dosing isn’t really a problem, and there already are clinical protocols for safe use and dosage.

The conclusion of these panels is that, before everything else, there is a need for a greater number of well designed clinical studies who will research the use of cannabis for medical purposes in different disorders, and will contribute to a higher quality and more precise finding, and changes in the legal framework.