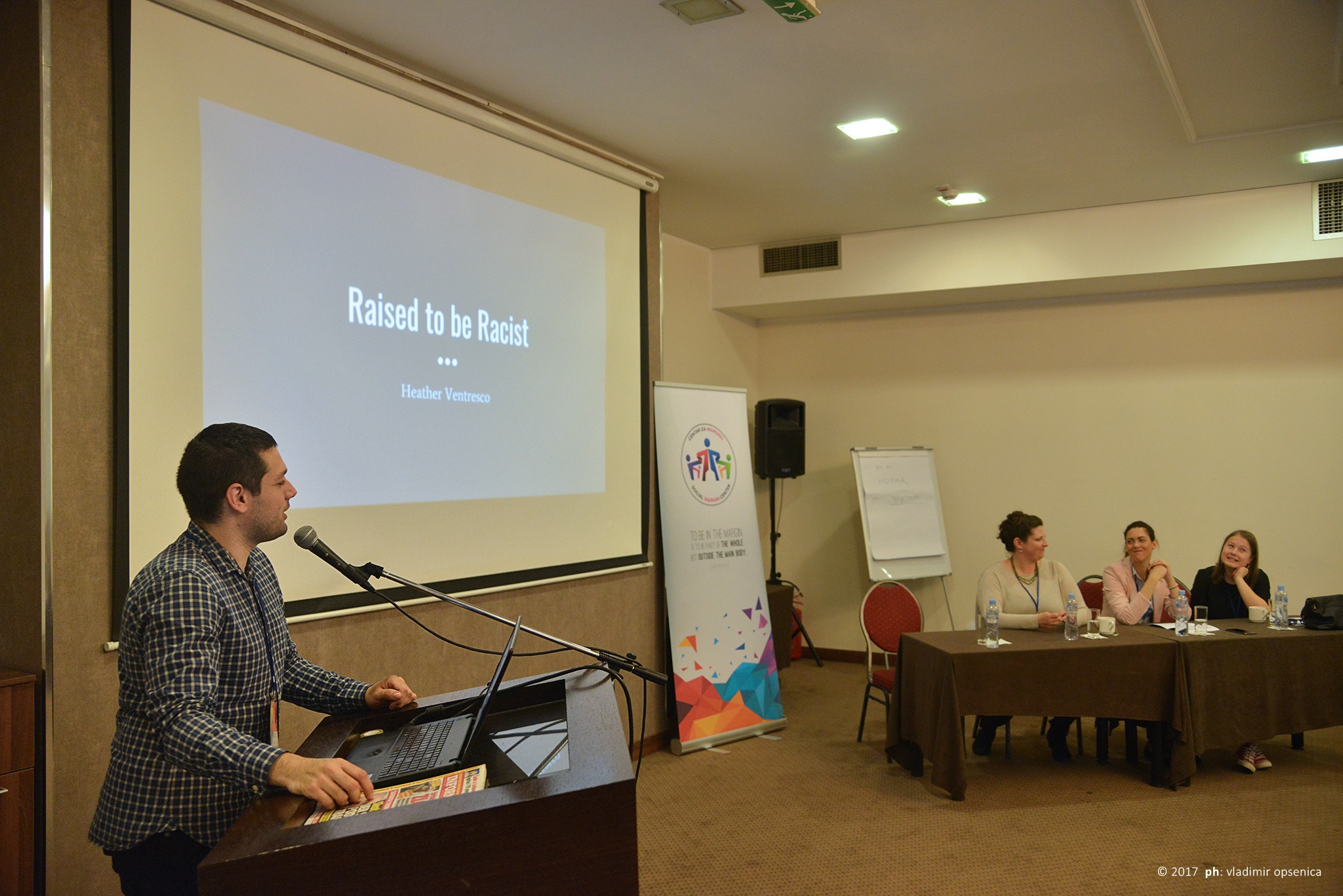 The working part of the conference closed the workshop on media content and a panel of media freedom and media reporting on sensitive social groups moderated by Nemanja Marinović from the Socal Margin Center, manager of the program “Media Literacy”. All participants had the opportunity to analyze the contents of Serbian daily press and magazines and make their own conclusions about the representation of men and women, the distribution of power in society, and portrayal of minority groups in Media .. which was later discussed at the panel.

By providing an introduction to the analysis of the content of domestic media Nemanja Marinović explained how vulnerable social groups was presented in Serbian media, especially women, LGBT and Roma. “Minority groups rarely appear in the media, but when it happens it is basicaly in the level of the incident, with sensationalistic headlines, stereotypical representations and filled by prejudice. Also, the voice of the minorities themselves are rarely heard. The biggest problem is the reporting in the case of male violence against women because of the victim blaming while a murderer has been portrayed as a good guy. The murder is presented as a crime of passion and tragedy in the style of Romeo and Juliet, which was particularly evident in the case of the murder of Serbian pop singer Ksenija Pajčin” said Marinović.

The guest on the panel was Heather Ventresco from the United States who spoke about racism in Western Media, with a special focus on American Media. She has been comparative analyzing media labels in which criminals or victims of people of different races were presented, and underlined that the black people are always portrayed negatively regardless of whether they are victims or perpetrators, while white people are always portrayed positively. She illustrated that with her personal experience “I lived the majority of my life surrounded by White people, learning White history, seeing White perspectives. It wasn’t until I was 32 years old that my perspective shifted. A 17 year old Black boy named Trayvon Martin was shot while walking home from the store. He was unarmed. The man who shot him was acquitted because he said he felt threatened. The media immediately began to portray Trayvon Martin as a thug, a criminal. I noticed this and was disturbed.” said Vetresco and explained why that case become so important for her: “Shortly after this happened, my own son, David, turned 17. On the night of his birthday, he and his friends were drinking, which is illegal in the US. A police car was driving towards them, and they got nervous and hid in the bushes. The police thought this was suspicious , so they pulled over to investigate. My son and his friend ran off into the woods. David was very athletic, and the police told us they never would have caught him, but he was running in the dark… straight into a tree, knocking himself unconscious. It was a tough night for us, but I couldn’t help but think about how this story may have ended differently if my son was black, or in a lower income neighborhood. What if my son had been shot, and the media immediately portrayed him as a thug? That was the day that my perspective shifted, and my privilege as a White woman really came into focus.” concluded Ventresco.

Two strudents of the “School of Media Literacy” organized by the Social Margin Center Milica Đerić and Vladana Stamenić also participated at the panel. They have presented their research papers. Milica Đerić presented the research she did with her colleague Ivana Stojanović in which they examined the degradation of Media in the 90s and the consequences, primarily through the prism of the media coverage of the anti-regime demonstrations, as well as the cases of killings of journalists – Slavko Ćuruvija and Dada Vujasinović. “Since that moment journalism as a profession is into a deep crisis, and became a dangerous profession. Anyone who dared to bring justice to light became a potential target. The murders, frauds, smuggling and other criminal activities remain unsolved, because the journalist wants peace and quiet life ” stated Đerić, and added that in the period from 1991 to the end of 2001 39 journalists and media workers have been killed, kidnapped, disappeared or died under unknown circumstances.

Her colleague from the “School of Media Literacy” Vladana Stamenić followed up on the subject of reporting from the protests and gave an overview of media coverage to the recent “protest against the dictatorship” and how young people are portrayed in the media. Analyzing texts on portals Informer, Kurir, Večernje Novosti and N1, she noticed that the portals N1 and Informer give a lot of space for young people, but their appearance is diametrically opposite. N1 often portrays youngsters as active and values them positively, while the image in the Informer is completely different: “The presence of young people is often negated (the terms “so called students”) or shifted to the alleged organizers of the protest (public figures and representatives of the opposition, and even and people with a criminal background). When mentioned, youngsters were called vandals and hooligans, or mentioned in the context of manipulated children” concluded Stamenić.

A discussion was extended after the designated time on a request of participants. Talking about racism and intolerance towards different social groups, participants originating from South America and Southeast Asia shared their observations, as well as personal experiences with racism with which they are frequently encountered in Europe.