Home Uncategorized Interview: Evdokia Romanova – Until we are hidden, everything is OK

At the 2nd International Conference “The Global Human Rights Forums” which was organized by civil society association “Social Margin Center” we had opportunity to listen the amazing speaker from Russia Evdokia Romanova from the regional LGBT movement “Avers”, Samara. She was a participant at the panel about Gender based violence, where she talked about the status of women in Russia and the problems that are connected with gender inequality. Evdokia emphasized that the main problems in Russia are about reproductive and labor rights of women. Recently, Russia has decriminalized domestic violence, and that has worsen already bad position of women in this country. Taking all of these points into consideration and the famous “Putin’s law”, work with the marginalized groups in Russia seems to be really a courageous task.

“Some communities don’t have protection so it’s really hard to work in those situations, it’s not safe.”

What would be the main issues when it comes to working with marginalized groups in Russia?
– There are many actually. First is the funding of course, it’s really hard to find funding, especially since 2013 Law has passed, regarding funding that can be accepted from certain organizations. Most of NGO’s have been shut down. Second, it’s lack of research that includes some of the marginal groups, so when we do not have these results and information we can’t do advocacy for these groups. Some communities don’t have protection so it’s really hard to work in those situations, it’s not safe.

What are some strategies you are using to overcomethose issues and barriers?
– Well, regarding to funding we are trying to attract as much funding as we can from different sources. It’s really hard to cooperate with Government and Police and other institutions. The necessity is also to have better institutional strategies for example in Social work centers.

You mentioned you combine art and activism. Could you describe some example of that approach?

– There is a concept known as ‘artivism’. It’s when you are using art into your activism practices. Different performances included (theater intervention). I’ve also had an experience practicing these theater interventions with Latino Hiv+ groups. In my other organization from Canada, we did a workshop publication, where we collected stories related to LGBTIQ youth in the world. We also published one of these stories related to the Rainbow families. These stories are really touching because they visualize lives of young people and second it can be a tool for advocacy, as personal story is very powerful when you speak for United Nations e.g.

“Mostly it’s okay, but while we’re keeping ourselves hidden from the society.”

Are you encountering any difficulties trying to organize some events or support meetings for marginalized groups in Russia?

– The community center of an organization I work for now ‘Avers’ it has a lot events almost every day – support groups, theater performance groups. We do not encounter bigger problems, unless the topic is not something that our government wouldn’t like so much. Mostly it’s okay, but while we’re keeping our selves hidden from the society.

How often or do you have opportunity to talk about some issues regarding to marginalized groups in Russia publicly?
– In Russia we are not talking about that so much publicly, we are primarily working with the community in our centers. But when we go to some International meeting we have more opportunities to talk about these issues.

You have a lot of experience in the various fields of activism. How would you describe cooperation and solidarity between various subjects, organizations and institutions regarding your experience of working with various communities on the regional, national and international levels?
– It depends. For ‘Avers’ I’m working on national level, but with other organizations I work globally. Sometimes it’s complicated because there are different ways you work and different approaches between organizing meetings and events on local and international level. 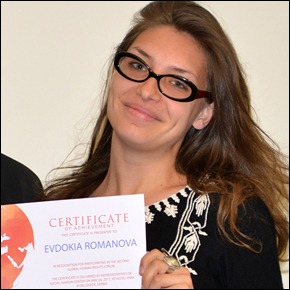 What would be of some specific strategies or steps for targeting general audiences and bringing awareness of gender (in) equality and gender based violence that you would recommend to your colleagues in Serbia?
– I know some really cool art projects, e.g. photo exhibits on the topic of violence against women and other forms of violence. Also theater is a powerful tool especially if it’s based on a personal stories of the persons who experienced violence. Our target should be people that are somehow indifferent or ignorant when it comes to knowledge and education about gender based violence, because there are a lot of them and they need to be informed. And also we should have more public events like street festivals.