The 2nd Global Human Rights Forums conference brought an interesting panel about constitutional systems in Europe. Three lawyers and law students from Turkey, Finland and Latvia spoke about the most important changes at this moment. One of them was Laura Sirpoma from Finland who introduced us to the Meaning of the Geneva Conventions and the International Criminal Court.

“The biggest social distance in Finland is probably between wealthy people and those without education and jobs, especially when coming from different cultures.”

Scandinavian countries are considered as countries where human rights are most respected, but all of them also have some difficulties. What is the real situation in Finland regarding this topic?
– It is true that in general human rights are well protected and respected in Scandinavian countries. However, the human rights situation in Finland isn’t perfect. For instance, the European Court of Human Rights (ECHR) has found that Finland has been in violation of Article 6 of the European Human Rights Convention (right to a fair hearing within a reasonable time). Within a few last years hate crimes and intolerance have also become an issue.

Which groups are the most vulnerable?
– In Finland people are entitled to social security and we also have progressive taxation, which levels down income differences. Long-time jobless who depend on expensive medication and refugees/ immigrants without knowledge of Finnish language usually have worst economic wise. The biggest social distance is probably between wealthy people and those without education and jobs, especially when coming from different cultures.

Which of the legislative issues you consider to be the biggest problem in Finland?
– I do not know if I can name one legislation problem that is “the biggest” and of the uttermost importance. I think that human rights are in general well protected in Finnish constitution but some laws make it too complicated to earn income through working because of all the bureaucracy.  Legislation should not hinder economic development but support it. Other hot legislation topic in Finland is hate speech.

You live in a smaller town in Finland. Is there any difference between your town, Turku, and Helsinki?

– It is not rare to hear someone joking “Why Paris, we have Turku, huh?”.  Turku is smaller and of course cheaper than our capital Helsinki. The first thing that sprang to my mind was that almost all law firms are in Helsinki. Both cities are really attractive, even though Turku is of course closer to my heart. River Aura and the cafés and restaurants nearby are worth seeing. 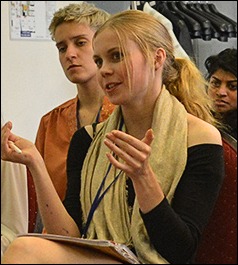 You have also studied in Miami. What is different in USA compared to Finland?

– I studied at Miami University in Oxford, OH, in the United States. Finland and the U.S. have considerable differences, of which I paid closer attention to the education and health care systems. In Finland both are free and in addition students receive approximately 500 euros a month from the state for studies.

“Bullying and violence have negative impact not only on the bullied but also on the bullies in their later lives.”

At the moment, you are researching violence and bullying in schools. This is a burning issue in all countries. What do you thing the reasons are?
– In my research for an American NGO I am focusing on anti-bullying legislation and programs, so I haven’t been focusing on the reasons of bullying so much I could offer a perfect explanation. Studies have shown that some people are looking to gain a feeling of power, purpose and control over someone else. However, it is important to note that bullies do not live in vacuum and their behavior is affected by their previous experiences.  Also the bullies have more likely experienced a stressful or traumatic situation in the past 5 years.

What can we do to protect and empower children?
– Protecting children from bullying is important because bullying and violence have been shown to have negative impact on not only the bullied but also on the bullies in their later lives. According to Harvard Mental Letter, victims of bullying are more likely to develop depression and bullies are more likely to be convicted of criminal charges. I believe we can protect children by securing important family relationships especially at an early age through legislation. For exampe, separating refugee children from their parents doesn’t sound like a smart idea to me, I believe that in most cases it could be against their benefit. Empowering children requires safe relationships too, but also general acceptance. How can anyone be empowered without acceptance and appreciation?

Your topic at the conference was the impact of the U.S opposition to the International Criminal Court (the ICC). Could you tell us more about the reasons for this and what are the potential consequences?
– I chose to speak about the U.S. opposition to the ICC because of the powers it has in the international field. The U.S. is not only a permanent member of the UN Security Council but is capable of significant economic influence over other countries. The U.S. hasn’t ratified the Rome Statute of the ICC and tries actively to shield its citizens from the ICC’s jurisdiction. The U.S. has for instance concluded bilateral agreements (BIAs) with countries in Latin America. These agreements stipulate that the contracting parties are not allowed to refer American citizens to the ICC. It is possible that the contracting parties can’t refer gross human rights violations to the ICC (where Americans are accused) because of the pressure of BIAs. If they refer cases to the ICC, they are in breach of bilateral agreements and may face sanctions and aid cutbacks.  This can create significant pressure on the contracting parties.

In most simple way, what exactly does it mean?

– In short: Sometimes countries with whom the U.S. has made BIAs do not have any possibilities to get cases (of which the U.S. citizens are prosecuted) to the ICC. If the courts of such countries are unable to handle cases within the ICC’s jurisdiction (e.g. crimes against humanity), the result may be that the cases are not adequately handled. 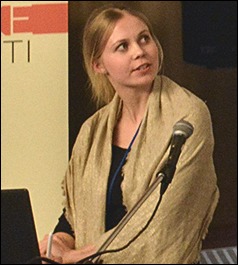 “Sometimes national courts are unable or unwilling to handle such cases. For instance, sometimes masterminds of genocides have been regarded as “national heroes”. This creates a need for an independent, international and universal court, such as the ICC.”

Some of our readers may not be familiar with ICC. First of all, let’s clarify what the role of this court is?
– One of the most important things to remember when considering the ICC is the principle of complimentarily. This simply means that the International Criminal Court is the court of the last resort and doesn’t investigate or prosecute cases unless it considers a state to be unwilling or unable to do this. The primary responsibility for investigating and prosecuting the crimes within the ICC’s jurisdiction are on the states. States, both those parties to the Rome Statute and non-parties can refer cases to the ICC and also the UN Security Council can choose to refer a case to the ICC. In addition the ICC prosecutor can exercise her proprio motu powers. The ICC is also independent court even though this has been subject to debate. In the court’s recent practice this has become clearer.

One of the points you highlighted is that human rights violations should be a matter of law, not politics. What do you mean by that and what should be done in order to get to that point?
– The most severe violations of human rights should be always handled adequately. Sometimes national courts are unable or unwilling to handle such cases (for instance, sometimes masterminds of genocides have been regarded as “national heroes”). This creates a need for an independent, international and universal court, such as the ICC. When states consider the reasons not to adopt the Rome Statute as conflicting with their national interests they allow gross human rights violations to become a matter of politics and not of law. I believe that we should give more weight to the rights of ALL individuals instead of solely thinking our national interests. We need strong cooperation and political will to overcome challenges. It is time to stop thinking our own nation’s best if that means neglecting all other countries. Problems are becoming increasingly global (for instance settlement of refugees) and this requires cooperation.

What is the meaning of Geneva conventions to you?
-Whereas these conventions have been regarded as ‘out of date’ we have to bear in mind that we need the protection of these conventions. The violations of these 68-year-old conventions are not rare and have occurred not only in Syria, but also in Ukraine, Iraq and other countries. Of course we have to acknowledge that the nature of warfare has changed a lot. International conventions alone are not enough to protect the rights of certain groups, but they offer a basis of cooperation and future development.

What are the points of Roma Statute and what is the reason for the most powerful countries not to ratify it?

– The United States, Russia and China are often regarded as the world’s most powerful countries and they’re also permanent members of the United Nations Security Council. The U.S. for instance opposed the ICC’s jurisdiction because of military interests and possible conflict with the U.S. constitution (lack of jury in the ICC). Also the definition of the crimes of aggression has caused opposition. Countries can be afraid that ratification could lead to situations where militaries wouldn’t be willing to perform some functions and tasks because they couldn’t be sure whether such functions would fall in the ICC’s jurisdiction. This kind of uncertainty would clearly be against country’s military interests (bearing in mind the principle of complementary I do not think that the ratification would do a great harm).