Home Uncategorized Interview: Sara Fusco – Victims of violence find no justice, not even...

Sara Fusco, representative of the Italian association“Ferma le tu mani“ (“Stop Your Hands”) which helps women victims of violence, was the guest of the “Social Margin Center” at the 2nd Global Human Rights Forums in Belgrade. Her speach was really touching combined with effective audio and video materials that ilustrate the problems all victims of gender-based violence face to and the omnipresence of violence in our society . We talked with Sara about her experiences in this fight and the challenges she encounters in her work.

“I realized that I was a victim of psychological violence by my ex-partner.”

When did you start researching gender-based violence?
– My interest on gender violence was born in my study period in Finland, where for the first time I studied “gender equality in Nordic countries”. It was my first exam and I learned to recognize the various types of violence. It made me realize I was a victim of psychological violence by my ex-partner. “Ferma le tue mani” association was founded by my mother Lysa Giannetta about two years before that, but at that point I decided not to take part. I was very young and my mother’s motivation reminded me of past family events that I didn’t want to remember. Ironically, at that time I was going through one of the worst periods of my life with my ex- partner.

What was her motivation?
– She decided to found this association for various reasons: personal experiences, unpleasant events of domestic violence against her friends, neighbors and acquaintances. Her interest and her ability to combat this kind of social problems became acute especially after her transfer to southern Italy, where the situation was and still is much more dramatic than the center-north of the country. There is a strong concept of patriarchal family and women have little influence in making family decisions.

So when did you decide to join?
– When I finished my studies in Scandinavia I knew how good it was to get all that information. If I had known before, I would definitely have looked for help and support. That was the moment when I joined “Ferma le tue mani”. Of course, I had to deserve the position in the association, so my mother took me quite a specialized curriculum which took me a year to make in order to be useful to the group and its goals. 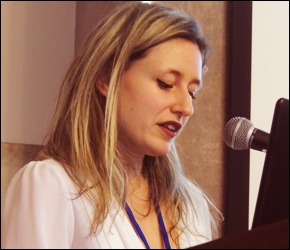 What are your goals and current projects?
– The main goal of the association is to raise awareness about violence against women and gender discrimination. We take part in many events (books, artistic installations, theatre, pride..) and we offer support to the victims (ante and post reporting to the police). At the moment, we would like to make a cultural event with other Italian associations and experts in order to share information and raise public awareness of the necessity for better legal protection of victims of gender violence. We would start from the schools and new generations because we believe that we have to prepare a base for a better society in the future.

You have studied in Finland, and then continued with the gender studies in Oslo. Could you compare the situation in Italy and Scandinavia regarding this topic?
– During my studies I discovered how much Italy was backward compared to Scandinavia: a predominant patriarchal tradition, a profound difference in economic and legal treatment between men and women, strong stereotypes, little attention to sexual violence etc.

Statistics that you presented at the conference are devastating. What does the statistics say when it comes to Italy and what is the biggest problem in Italian society?
– About one and a half million women in Italy have been victims of abuse, more than half by their partners. Being a law student, I can assure that women’s protection laws exist but are not enforced. Italy’s first problem is society. The Italian society is still full of prejudices and hatefulness. Another issue is also the strong influence of the Church and the Catholic Christian religion, according to which divorce is forbidden and domestic violence almost justified. The maintenance of the patriarchal family has created a generation where mothers often justify the violent husbands of their daughters. It is difficult to make precise statistics or determine which is the greatest risk for Italian women. For my experience, the most decisive figure is domestic violence and then sexual violence. It is not always true that Italian women do not report to the police. The real problem is that women, even if they denounce it, find no protection and justice. Not even after their death.

One of the most effective moments at your presentation was “Posto Occupato”, could you tell us more about that?
– The campaign “Posto Occupato” is, as its creator Maria Andalorio said, an “initiative with 0 costs and 0 km”. It was created in 2013 and it indicates a spot which could has been taken by a woman, victim of violence. We loved the idea and we use this concept in every our events.

Could you tell us more about “Zapatos Rojos” and your collaboration with Elina Chauvet?
– We are so much inspired by Elina Chauvet, because our association President is an artist as well and she can feel all the values behind this idea. The “Zapatos Rojos” represent all the female victims by male hand. Firstly, the idea was to show the dramatic situation in Mexico, but in a few years it was brought in the most famous squares in the World. In one of our events we have made a red bench with an honorific label with the name of Vincenza Avino on. She is a victim who was killed after she reported the aggressor to the police 10 times. I also think that the “red color” has a strong visual impact referring to the gender- related aggression.

What does the red shoes mean to you?
– “Red shoes” mean all the options, dreams, projects, hopes of all the victims of violence. “Red shoes” are not just a sign of a “spot taken” but also everything beyond a physic present in the world. “Red shoes” symbolize everything that could have been, but didn’t have the chance to.

“Men are always victims of what the society expects from them.”

It is very rarely that we can hear someone speaking about the gender-based violence from the perspective of male victims too. What types of discrimination are men in Italy exposed to?
– Yes, I admit that it is more common to talk about female discrimination than male discrimination. Certainly, female discrimination is widely manifested and I think it is fair to talk about it and look for solutions. However, we must also point out that there was and still exists a form of anti-male feminism. Many laws have been promoted by a feminist ideology such as the law that a woman can’t go to jail until the child’s third year – as in William Pezzulo’s affair. For example, some time ago the custody of children after the divorce was given exclusively to the mother, with possibility that the father had to pay a maintenance for both of them even if he is not allowed to see the child. Just like there are so many different kinds of discrimination of women (work, housework, school, sex..) there are also more legal obligations and duties for men. Men are always victims of what the society expects from them. They need to be strong, full of opportunities, decisions makers, conquers… All men who are different then that are considerate weak and “no-man”.

You have mentioned William Pezzulo, the acid attack victim. How is he now?
– William Pezzulo, as I said during the conference, is one of Italian victims of female violence. He is really kind and brave guy who only wants a justice for himself. He is looking for a way to pay his operations, considering that he can’t get any benefits from the state. Now he needs to solve his problems with eyes because he is almost blind and he can’t work and be independent. 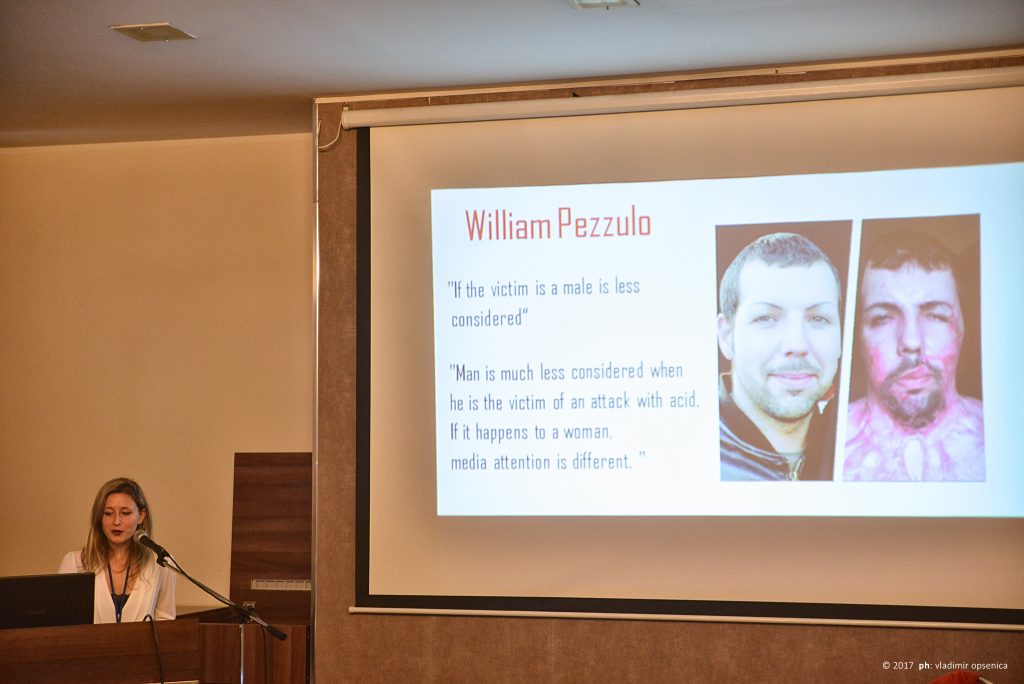 Are you optimistic when it comes to solving the problem of gender-based violence?
– Well, I believe that raising awareness about gender-based violence and discrimination is a strong and useful tool to solve this kind of social and HUMAN problems. I hope for the new generation, which will build the future of society, to be more respectful, aware and equal.