The second “Global Human Rights Forums” conference organized by the Serbian Association “Social Margin Center” in Belgrade was a blend of youth and experience. Panelists and speakers werw prominent activists and researchers from all around the world, but also young students from Serbia who participated in our “School of Media Literacy” and demonstrated exceptional knowledge and motivation to explore the burning issues in the domain of human rights. Ivana Ćetković and Ivana Stojanović moderated panels on gender-based violence and the challenges of the migrant crisis, and presented their articles on these topics. Vladana Stamenić and Milica Đerić participated at the media panel where they presented their research papers in front of the international audience. We talked with these four great and extremely motivated girls about activism, the importance of non-formal education, and the opportunities that young people could get during their education.

„The Global Human Rights Forum” brought a special energy in Belgrade. Having so many young people full of enthusiasm and a desire for change in one place, it is really inspiring (Vladana Stamenić)

Our educational system is quite rigid and leaves little space for any kind of research work on topics that are not strictly prescribed by the curriculum, but you are proof that this is possible with a strong will and personal initiative. How much opportunities do young people have to express themselves in a fields they are interested in?
– Vladana Stamenić: I believe that only a small number of young people receive the opportunity for such improvement or presentation of their work in formal education. More chances are gained within the organizations that the young people themselves initiated.
– Ivana Ćetković: Opportunities certainly exist, but within the framework of non-formal education and programs organized by non-governmental organizations. They give young people the opportunity to be creative in their choice of topics, but also to contribute to the visibility of topics that are neglected.

Have you ever had the opportunity to speak at an international conference and how did you feel presenting your work to the experts from around the world?
– Ivana Stojanović: At this type of conferences young people are mostly involved as volunteers and part of the logistics, not as participants themselves. Prior to this event, I was only a participant in conferences as audience. On this occasion I had the opportunity to see myself as someone who speaks to many nationalities, to present such a serious topic as the challenges of the migrant crisis and make an introduction for my interlocutors and this experience is invaluable. I am pleased that my very first experience was at the event that promotes human rights.
– Milica Đerić: This is the first time I spoke at an international conference and the feeling is wonderful! Of course, there is always a preasure, because you want to present yourself and your work in the best possible way. However, after completing my presentation, I realized that I have just explained significant facts about the media scene in Serbia and the issues that accompany it to people from various parts of the world. At that moment, you can only feel important and proud.
– Vladana Stamenić: I had this opportunity at a professional conference in Zagreb. International conferences are great experiences for me. „The Global Human Rights Forum” brought a special energy in Belgrade. Having so many young people full of enthusiasm and a desire for change in one place, it is really inspiring”

The situation has not changed much since the 1990s. Media propaganda is present even today. The difference is visible only in the circumstances – larger and more intense protests demanded stronger propaganda. (Vladana Stamenić)

None of you got to the conference by chance, but thanks to the dedicated work during the “School of Media Literacy”, as well as the exceptional quality of the articles and research papers you wrote during the program. Vladana, you are studying literature, but even though you have not dealt with this type of writing earlier, your analysis of youth representation in the media is really great. How hard was it to find and analyze information about young people and on what are the texts you found mostly based?
– Vladana Stamenić: Young people are mostly represented in light themes such as fun and sports, they are shown through stereotypes – destructive or self-destructive, rebels without reason who do not want to work and contribute to society. They are unmanaged, or they get their number in statistics among those who leave the country every day. This picture of the generations that should be the future of Serbia testifies that the state and media do not want to hear the voice of the youngsters.

You analyzed the representation of young people who participated in the recent “Protests against dictatorship” after Aleksandar Vučić’s election as president of Serbia, while your colleague Milica Đerić talked about the degradation of the media in the 1990s and media image of the protest at the time. The impression is that the same mechanisms are still used today, 20 years later?
– Vladana Stamenić: Exactly. The situation has not changed much since the 1990s. Media propaganda is present even today. The difference is visible only in the circumstances – larger and more intense protests demanded stronger propaganda.

Milica, in your article that you wrote along with colleague Ivana Stojanović and on which you based your presentation at the conference you are writing about the degradation of the media of the 1990s and the murders of journalists Slavko Ćuruvija and Dada Vujasinović. One thesis is that journalism has become highly risky. Are you, as a future journalist, afraid of it?
– Milica Đerić: I would not be honest if I said I was not afraid. It is sad that journalism has become a profession that carries the epithet “dangerous to life”. On the other hand, if I said I was afraid, I would not do anything to help my profession. A journalist needs to be brave, to decide to risk, like Brankica Stanković, to whom every honor of courage and everything that she has done so far. I do not know where the life will take me, but at the moment I do not have enough courage to go into that. I just like to go a peaceful and safer way.

What are your plans for professional development in the future?
– Milica Đerić: I’ve always been interested in the scene, public performance and communication with people, so I have chosen journalism and communication. I find myself in television journalism and public relations. I want my career to develop in this direction, but in addition, I would not want to leave my hobby that is turned to art, music and acting.

In a country like Serbia, where high education is not common, Media are the ones that educate citizens, daily and for “small money” (Ivana Stojanović)

Ivana, you wrote that article together with Milica, but at a conference you moderated discussion on migrant crisis and introduced the participants in this subject on the basis of the text that you wrote for the project of another organization. What are the biggest problems when media coverage of minority groups is concerned?
– Ivana Stojanović: Problem in reporting on minority groups, in recent years mostly on the migrants and asylum seekers, is the lack of education of journalists, and lack of understanding that education does not stop after university, especially when it comes to issues in which constantly encounters new challenges. Journalists in the race for exclusivity do not pay attention to violations of many ethical rules, as well as the human rights of this groups. Such omissions remain largely unpunished and therefore repeated.

What is the role of the media in creating a public opinion about marginalized groups?
– Ivana Stojanović: In a country like Serbia, where high education is not common, Media are the ones that educate citizens, daily and for “small money” . The media besides the role of entertainment and sharing the information have the responsibility to educate the public, although they often put it in the last place. Media influence is far-reaching, and the consequences are permanent. Of course, responsibility can not be attributed only to the media, but it is the place from which it should start.

Youngsters need more opportunities like Social Margin Center and “School of Media Literacy” offers. More seminars, workshops and conferences where young people would have the opportunity to express themselves and do research in a fields that matter to them. (Ivana Ćetković)

Ivana Ćetković did not talk about the local context at the conference. You moderated a gender-based violence panel where you also showed local problems and cases of violence in the Pride Parade, but you also dealt with the situation in Chechnya and the horrible violation of human rights of LGBT people that is hidden from the public. Who has responsibility for Chechnya?
– Ivana Cetković: Responsibility for the current situation is certainly borne by the institutions of the ruling regime in Chechnya, but we all have the responsibility to react to it. Such events must not go unnoticed, we should talk and write as much as possible about this issue and help in various ways, through donations, petitions, but also by providing support to non-governmental organizations dealing with this problem in Russia and the world.

When it comes to Russia, it’s extremely difficult. One of the speakers at your panel, Evdokia Romanova, wrote on her Facebook profile about the LGBT population and shw is currently accused of spreading “homosexual propaganda”. How do you comment on that, considering that you had the opportunity to meet Evdokia and interview her?
– Ivana Ćetković: The news has come to me unprepared, although Evdokia has said that such cases are reality in her country. I strongly condemn such measures by Russian representatives and urge everyone from local and regional level to international level as well to write about this and provide their support through social networks, petitions or in any way they consider adequate.

For the end of the interview, let’s return to the attitude towards youth and the needs of young people. What kind of content for young people should exist, what would be significant for you?
– Ivana Ćetković: Youngsters need more opportunities like Social Margin Center and “School of Media Literacy” offers. More seminars, workshops and conferences where young people would have the opportunity to express themselves and do research in a fields that matter to them.
– Vladana Stamenić: We need more content that would imply getting closer with young people from the former Yugoslavia – this would contribute to the reconciliation and eradication of hatred in this region. There are a lot of quality programs for young people, but they do not have adequate media attention and generally are available only in larger cities, so smaller places are left without any initiatives. 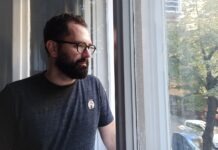