At the 2nd International Conference “The Global Human Rights Forums” which was organized by civil society association “Social Margin Center” we had the opportunity to learn about malaria and social circumstances that contribute to the development of this infectious disease. The speaker for this topic was Thuvaraka Thavayogarajah, Ph.D biomedical sciences, from Germany.

“Being different made me who I am today and only now do I understand the true value of it and have the courage to dream big.”

You were born in Germany and your parents are from Sri Lanka. For what reason they left Sri Lanka and what was the situation in the country at that moment?
– My parents belong to the minority Tamil community in Sri Lanka (Ceylon). Ever since Sri Lanka gained independence from Great Britain the relationship between the majority Sinhalese group and the minority Tamils on this island was tensed and eventually resulted in an armed conflict. My parents already experienced discrimination in their daily lives, but July 1983 (Black July) is considered as the starting point of extreme violence against the Tamil community: within a couple of days thousands of Tamils were killed, their shops/houses burned, and thousands were made homeless. Many feared for their lives and started fleeing to other countries, especially between 1983-1985. My parents were among them.

The civil war happened in 1985. How difficult it was for your parents to get accepted in Germany?
– At that time foreigners with a different skin color were rare in Germany – especially in the small town where my parents settled. My parents did experience racism and discrimination back then – from neighbours, strangers passing by on the street and even government officials. Today it became much more subtle. I do not think that they will ever feel accepted and there will always be people who will never accept them.  At the same time, they were fortunate enough to meet generous, open-minded and good-hearted people, who did not bother about where my parents came from, what language they spoke or what God they worshipped. They saw the struggle and misery my parents had to face and helped them. Strangers spent their money, their time and their knowledge to support my parents – and these strangers became their guardians and friends. My parents will always be grateful for their generosity and kindness.

How was it like to grow up as a child of migrants in Germany? Has the peer group and society accepted you? Have you ever felt discriminated because of your origins?
– If your parents are unable to speak the language, don’t know a lot about the culture, tradition and the religion of the country, your name is difficult to pronounce for German people and you do look different than everyone you encounter from Kindergarten to High school – you will feel different. I have felt discrimination throughout my life – from peers, teachers, and strangers. But there were more people who did not bother about my origins and became my friends, more teachers who saw my potential and supported me and professors who helped me succeeding in my professional life. Being different made me who I am today and only now do I understand the true value of it and have the courage to dream big.

What is the situation today in Sri Lanka?
– The war between the Tamil militant groups and the Sri Lankan government officially ended in May 2009, with thousands of casualties and unspeakable atrocities. These wounds will not heal easily with those, who suffered most from this hideous war. But I hope that the new government of Sri Lanka and the leaders of the minority groups will find a way with the help of the international community to create a better future for the people of this country. But this will take time, patience, a mutual understanding, an open heart, the strength to forgive and a good will. 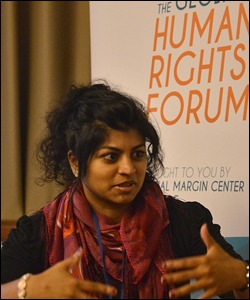 Do you think that you would have the same opportunities to study and research and become PhD if your parents never left?
– I don’t think that I can answer this question, since many factors play a role and it will remain a hypothetical thought. I would rather like to focus on the fact that I was one of the lucky ones who was able to receive a good education and that I can use my potential and strength to work towards creating a better world.

When did you decide to be scientifically involved in malaria research and what was your motive?
– I decided to become scientifically involved in malaria research after my Masters. I was fortunate enough to be selected by the EU-funded International PhD program on the Biology and Pathology of the Malaria Parasite. My motive to engage in Malaria Research was to learn about a disease, which is each year responsible for the death of millions of people predominantly in African countries and to make a contribution towards conquering this diseases a scientist.

Could you share with our readers your experience from research time in Africa?
I spent my research time in Germany, attended a course in Africa and met and worked with scientists from many different countries. One of the best experiences I had during my stay in South Africa was the encounter with young and extremely talented students (16-19 years) of the African Leadership Academy. I was surprised and impressed by their ability to attend and successfully participate in a course which was designed for PhD students and Postdocs with advanced knowledge in the area of Biology/Biochemistry/Biophysics. This was truly an outstanding performance by those young people, the future leaders of this nation, who were determined to bring positive change and generate growth in their countries.

What does today’s data say? Where malaria hits the most?
– Malaria is the second largest infectious disease in the world with around 212 million cases and 1 million deaths annually (WHO 2015). It affects the most vulnerable ones among us: pregnant women and children under the age of five. 90 % of Malaria casualties occur in African regions.

What are the social circumstances and life conditions that help to the development of malaria?
– Poor living conditions lead to the development of Malaria. This means more people are affected by Malaria, hence opportunities for work and education is lost, which creates a weak economy and an expensive health care burden. But financial difficulties in these communities prevent Malaria Prevention Policies. It’s a vicious circle, where poverty causes Malaria, and Malaria leads to poverty. 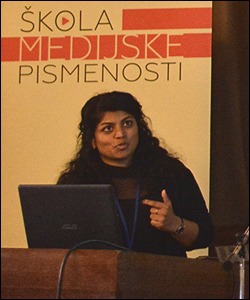 “Not being vaccinated means increasing risk and decreasing safety of an entire population.”

Do you think that health is really a human right or privilege of citizens of rich countries?

– Health is a human right, and should never be a privilege of citizens of rich countries. By denying people health as a human right, we all lose. I strongly believe that each individual has an incredible talent, but needs a good and safe environment to develop it. With millions of people dying due to Malaria every year, we are losing on possible great artists, musicians, writers, athletes, architects, scientists etc. We are losing potential. We are losing possibilities. In any case, we lose.

Vaccination is currently a burning issue in Europe and many scientists report in public that vaccines are harmful. What is your opinion about that?
– I believe that vaccination is crucial to prevent the outbreak of infectious diseases. Vaccines are extensively tested in multiple clinical trials before they receive marketing authorization. At the same time scientists constantly monitor information on any adverse events, which might occur from vaccination. The side effects, in case they occur, are mostly minor and temporary. Not being vaccinated means increasing risk and decreasing safety of an entire population. Without vaccination diseases like e.g. polio or measles will return and a whole nation will be put on risk, when these diseases start spreading again.

Does the vaccine against malaria exist and how is this disease suppressed?
– In brief: A vaccine called Mosquirix (RTS,S )developed by Glaxo Smith Kline and sponsored by the Bill and Melinda Gates foundation ,appears to be a suitable candidate to potentially save lives by giving partial protection against Malaria in young children. The vaccine triggers the body’s own immune system to defend against this disease. Mosquirix is designed to prevent the malaria parasite Plasmodium falciparum from infecting the liver stage (Lancet 2015), after which the parasite invades and infects human red blood cells leading to typical symptoms of Malaria, like fever, chills and headache.

What are your predictions for the future? Will malaria be overcomed or is it likely that the disease will spread?


– It was possible to eradicate small pox – one of the world’s devastating diseases, so the WHOs vision of a Malaria free world is also imaginable. A decrease in malaria incidences and mortality rates could already be seen on a global scale between 2005 and 2010 and Malaria has been eliminated in seven countries as a result of the efforts by WHO. The rate of progress will depend on the level of investment in malaria control with strong political and financial commitments in terms of more health care programs, better Malaria surveillance systems, more research, etc.  In this regard WHO has created a technical framework for all malaria-endemic countries to eliminate this deadly disease by 2030 in alignment with Sustainable Development Goal (SDG) 3.3. (WHO 2016).