Home Uncategorized Sasha Keiner: It is impossible to live in Russia!

At the 2nd International Conference “The Global Human Rights Forums” which was organized by civil society association “Social Margin Center” on the 18th – 20th of May in Belgrade, we had opportunity to welcome the most engaging human rights advocates from 15 countries. One of them was Sasha Keiner, activist from the regional LGBT movement “Avers”, Samara. He was a participant at the panel about Gender based violence where he talked about human rights in Russia especially transgender human rights.

At the beginning of his presentation Sasha stated that there is a lack of an extensive researches about the position of the transgender persons in Russia. Thus, I was interested in his personal experience, as he is the part of the LGBT movement in Russia.

Regional LGBT movement “Avers” from Samara where Sasha works is focused on giving a legal and psychological support to the LGBT population. Since last year, their main focus is transgender population and their families. I was interested in the common problems they are encountering in their activist field.
As Sasha argues, the actual approach to the target groups is the hardest part:
– It’s hard because of a state pressure and also these groups are hard to find. They are invisible. There is not enough funding, it’s hard to spread information for these groups, so overall it’s hard to reach them. 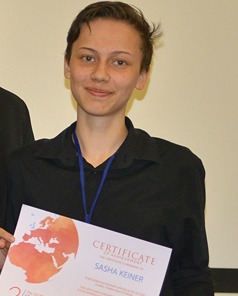 What are some strategies you are using to overcome those issues and barriers?
– We have a project of creating a website for transgender people because there is a lack of information in Russia. We also have community center where people can come for legal and psychological support. We try to lower the level of transphobia in society and also we have some strong advocates.

Is it even possible to talk about some issues regarding to transgender human rights in Russia publicly?
– It’s almost impossible. We have some Media that are friendly, but even those Media are not always supportive and they don’t spread always accurate information.

“In the past few years it’s only getting worse.”

Because of the specific political situation, Russia is quite isolated from the European activist community. How would you describe a cooperation of the different organizations and subjects at the regional, national and global level?
– There is a certain form of the cooperation. For example, recently I’ve been to Moscow on a conference dedicated to transgender people’s life, where the main goal is to consolidate our powers. However, some organizations are not so welcome in Russia, so we don’t have always possibility to cooperate with them.

How would you describe the future of transgender human rights in your opinion (in Russia and in the world in general)?
– Personally I wouldn’t be so optimistic, because in the past few years it’s only getting worse. But still, if we are talking about future in long term of course yes I am optimistic.

The horrific news these days are the one about the current situation of the homosexual persons in the concentration camps in Chechnya. Is there anybody in Russia that is involved in resolving this problem and what can international community do to support these people?
– We should do our best to get people out of there. There are some people from Moscow that are transporting them from Chechnya. The international community should attract attention to this situation, but it is also important that some countries accept people that are going away from Chechnya. 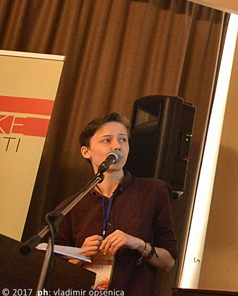 Journalist: Ivana Ćetković
Ivana is a former student of our “School of Media Literacy”

Read more about the conference